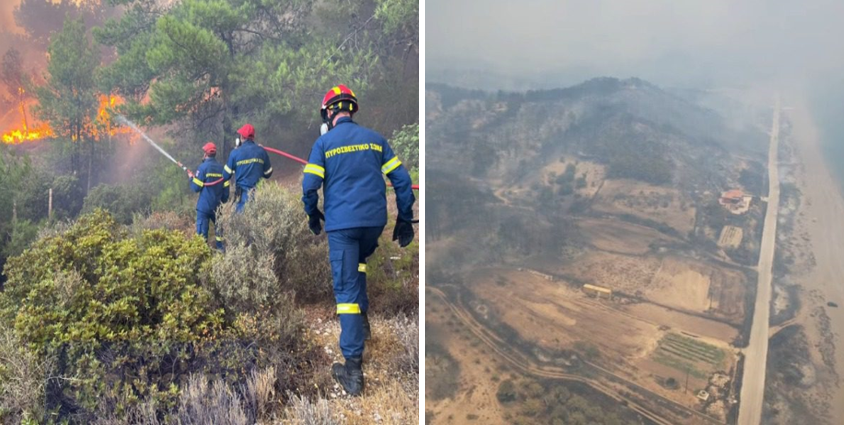 Characteristics of the FIRE-RES Living Lab in Lesbos

Europe went through a record amount of fire damage during the summer of 2022, as the continent faced extremely high temperatures combined with a prolonged drought. In July, fires hit several countries across Europe. Firefighters in Portugal, Spain, France, and Greece were all battling forest fires across tens of thousands of hectares.

A large fire broke out on the island of Lesbos on the 23rd of July 2022 and only got under total control after six days. The wildfire event started amid a heatwave in a forest area with articulated topography and flammable dense forest fuels (shrubs, pines, olive trees). The fire had two active fronts and was characterized immediately as “extreme” by fire authorities. The entire fire fighting mechanism was immediately activated, and local authorities ordered the evacuation of locals and tourists visiting the popular seaside resort of Vatera, as the flaming front was almost 20 km wide and was pushed dangerously close by strong NE/ ENE winds (30-37km/h). During this event, the Copernicus satellite data recording system was activated.
FIRE-RES partners from the University of the Aegean estimated that the burned area covered 2,163 ha. The fire effects on the loss of vegetation and soil impacts were high in 253 ha of the total surface (11 %). Severe damages were caused to house owners, businessmen, farmers, breeders, beekeepers, and landowners in the whole area.

The importance of forest fire assessment

Professor Kalabokidis from the University of the Aegean and coordinator of the Greek Living Lab within FIRE-RES participated in fire management processes and informed citizens about the wildfire status through public radio and TV Channels. He highlighted the importance of a post-fire assessment strategy and operational activities that need to be scheduled (post-fire treatment, reforestation, flood prevention, etc.). As such, he attempted to give a reliable picture of the current socio-economic and environmental situation in the Vrisas-Vateron-Stavros area. Professor Kalabokidis also stressed the importance of fire prevention and suppression through an integrated fire management approach. Moreover, he underlined the necessity of fuel reduction and the creation of fire protection zones along with fire prevention of ignitions to reduce damages from extreme wildfire events.

This approach will contribute to the FIRE-RES strategy of creating a holistic and integrated fire management approach that considers the reduction of the number of human losses, as well as the negative impacts on buildings, land, ecosystems, and health caused by wildfires in Europe.

🗣 The 1st Joint Dissemination Workshop of the #EUFireProjectsUnited is happening now!
🔥Pau Brunet from ...@ctforestal, just presented the FIRE-RES approach, challenges and future perspectives of the upcoming years!

❗Do not miss it❗ On Monday 23rd of January at 13 CET the first Dissemination workshop of the #EUFireProjectsUnited ...will take place online.
You can register here:
👉🏼 https://t.co/edB0iEcwRT
🔥We look forward to discussing project results and identifying new synergies!

🗣️Our partner from @Technosylva presented FIRE-RES at the event "Progress in Fire Modelling in the UK". The ...meeting was an opportunity to discuss:
🔥synergies with other fire-related projects
🔥data products used (or could be used) for wildfire model calibration and validation.

🔥Union means strength, this is the reason why the exchange and collaboration among projects are crucial elements for... efficient Wildfire Risk Management 🔥

🤔Do you have a successful initiative?

We are looking forward to a fruitful new year to make our territories more fire ...resilient!