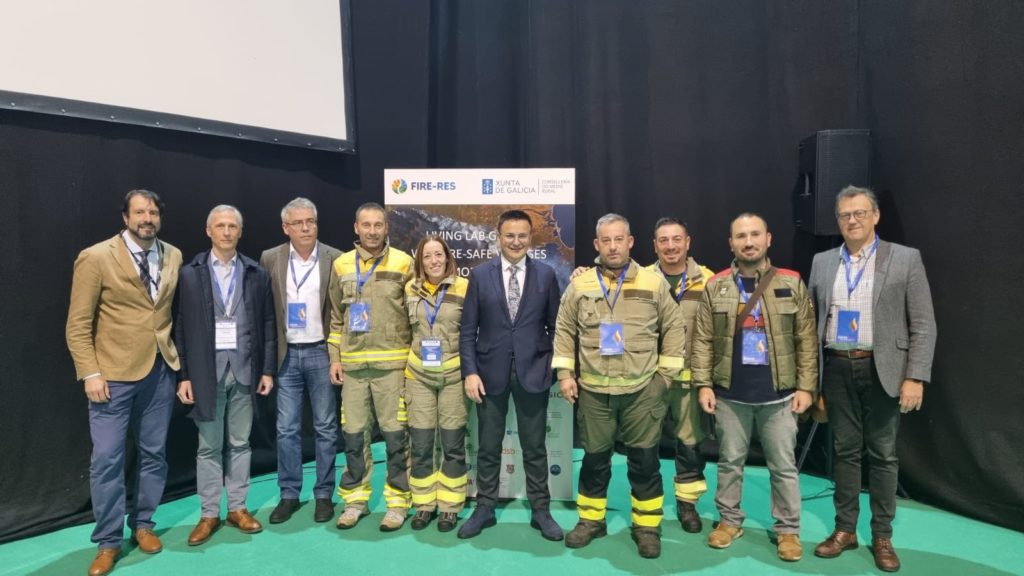 Discussing the situation of forest fires during summer 2022 in Galicia

Having an efficient and fast operational response capacity is crucial to the extinction of forest fires. It gained more and more importance during summer 2022 in Europe due to the vast outbreaks of forest fires. This summer, in Galicia, forest fires were responsible for the emission of 2,376,000 tons of CO2 into the atmosphere, with an estimated cost of 78 million euros. Moreover, the simultaneous occurrence of several intense fires in different parts of the territory has caused a civil emergency never experienced before.

This is what was discussed during the I° International Congress on Forest Fires hosted in Silleda, Galicia (Spain) on the 17th and 18th of November 2022. The congress was organised in the framework of the SEDEXPO I° International Security, Defense and Emergencies Fair as an activity of the EU project Interlumes[1]. The FIRE-RES coordination team (CTFC) and Xunta del Galicia attended the event and presented the project and the Innovation Actions in the Galician Living Lab. The congress hosted several talks and round tables with experts in forest fires from Galicia, Spain and Portugal, as well as with high level policy makers including the Galician Minister for Rural Affairs, José González, the General Director of Forest Defence, Manuel Rodríguez, and the General Director of Emergencies and Interior, Santiago Villanueva.

During the event, the Minister described this summer as dramatic and stressed the importance of having a landscape where the availability of fuel is discontinued.  In this respect, he pointed out the need for firebreak and mosaic landscapes[2] in Galicia. The role of firebreak landscapes is to generate discontinuities in biomass, while mosaic landscapes aim to reduce the risk of large fires in areas with a high degree of abandonment. He further announced that a new Galician law for the integral fight against forest fires is under preparation and will help advance prevention in the region.  Finally, the Minister emphasised the need to involve citizens in fire-risk management and prevention, and alongside a well-planned land management.

As partner of FIRE-RES, Xunta de Galicia is implementing two Innovation Actions in Galicia to quantify the impacts of exposure to air pollutants generated by wildfires, and the use of virtual reality tool to train inhabitants in the region’s villages.

The first Innovation Action aims to monitor a large part of the Galician territory with sensors for measuring pollutants from the smoke of forest fires. This will provide valuable data on the level of exposure of both those involved in the emergency response and the rest of the population. With this, the appropriate solutions can be predicted and adopted.

The second Innovation action aims to use virtual reality to train inhabitants on how to behave in cases of fire emergencies. To do so, people will be shown fictitious fire episodes at different levels of intensity, together with information on how to adapt their emergency response, self-protection or best route to scape, in case the worst scenarios would ever occur. These activities will be supervised by experts in security and civil protection.

[2]A firebreak landscape is a landscape that has a gap in vegetation or other combustible material that acts as a barrier to slow or stop the progress of a bushfire or wildfire. Landscape mosaic is a heterogeneous area, composed of different communities or a cluster of different ecosystems.

🗣 The 1st Joint Dissemination Workshop of the #EUFireProjectsUnited is happening now!
🔥Pau Brunet from ...@ctforestal, just presented the FIRE-RES approach, challenges and future perspectives of the upcoming years!

❗Do not miss it❗ On Monday 23rd of January at 13 CET the first Dissemination workshop of the #EUFireProjectsUnited ...will take place online.
You can register here:
👉🏼 https://t.co/edB0iEcwRT
🔥We look forward to discussing project results and identifying new synergies!

🗣️Our partner from @Technosylva presented FIRE-RES at the event "Progress in Fire Modelling in the UK". The ...meeting was an opportunity to discuss:
🔥synergies with other fire-related projects
🔥data products used (or could be used) for wildfire model calibration and validation.

🔥Union means strength, this is the reason why the exchange and collaboration among projects are crucial elements for... efficient Wildfire Risk Management 🔥

🤔Do you have a successful initiative?

We are looking forward to a fruitful new year to make our territories more fire ...resilient!