Understanding the interaction between atmosphere and fire: a simulation of Pedrógão Grande extreme wildfire (Portugal) 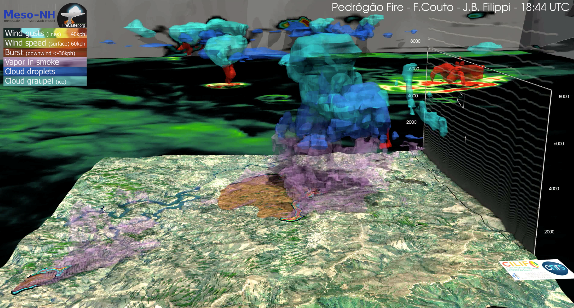 THE ASSOCIATION BETWEEN WILDFIRES AND THE ATMOSPHERE

Extreme wildfires may be associated with strong convective processes due to the heat and moisture released from fires. Such a fire-atmosphere coupling environment leads to the formation of convective clouds: PyroCumulus (PyroCu) and PryroCumulonimbus (PyroCb). The first are more common and can form as relatively small clouds above fire plumes. The second can be observed in plume-dominated wildfires characterized by an intense convection column, above which a cloud resembling towering cumulonimbus may form.

HOW CLOUDS CAN IMPACT FIRE BEHAVIOUR

PyroCb and PyroCu activity can significantly impact fire behaviour through feedback processes between the atmosphere and the fire. In fact, the microphysics process (e.g., the condensation of moisture in the fire plume), can increase fire convection processes by releasing latent heat. As such, those processes can be able to penetrate the atmosphere. This may lead to strong wind variations (direction and speed), convective inflows, and downdraughts. Consequently, PyroCb lightning and an increased fire ignition can trigger and spread new fire outbreaks at a faster rate, enhancing the risk of extreme wildfires. Thus, it becomes extremely important to understand the circumstances and the dynamics between PyroCu, PyroCb, atmosphere, and fire.

THE EXTREME WILDFIRE EVENT IN PORTUGAL

To understand what happened and why the events had such a catastrophic result, the French National Centre for Scientific Research (CNRS), FIRE-RES partner, together with the University of Evora (CILIFO project) made several simulations aiming to obtain the most realistic scenario of the event. The result of this work can be seen here. The simulation can explain PyroCu formation, as well as the wind intensity and turbulence in the convective column over the wildfire. The numerical setup used in this simulation is expected to be deployed for extreme fire events in selected living labs in the FIRE-RES Program work Package 5.

ℹ️ JRC Report provides a description of the fire season 2020 from the countries ...perspective and the same type of analysis from the European Forest Fire Information System @jrc_EFFIS

We are hiring! Postdoctoral offer within the FIRE-RES project, about changing and future fire regimes in Europe. Job at... CTFC, Solsona, Spain, in an excellent environment with a lot of flexibility. Circulate it!

Did you miss our first newsletter? Do not worry, you can find it here 👉🏼https://t.co/Ib8QIE4Ig2 and subscribe to ...keep updated on our next results 🔥!
#ForestFires #extremewildfires #forestinnovation #ManagingWildfires